Making a moving object objective requires many interconnected entities and scripting, especially if it needs to be damageable.

The keys you will need to set on the trigger_multiple are:

You may also want to set some of the spawnflags , to allow only one team, or one class, the ability to move the object.

The keys you will need to set on the trigger_objective_info are:

You must set the tank spawnflag for this to show up correctly, and if the object is to be destroyed, the team that owns the object must be chosen from the objective spawnflags.

The trigger_multiple should be a fairly large area around the object, whilst the trigger_objective_info should just fit around the edges, thus only allowing people to construct it when very close to it.

Building, Destroying and the Object Itself

The object itself is made from a script_mover entity. This is best made out of clip brushes, with a model2 key supplied to use an external md3 model.

The keys you will likely want to use for this are:

For damage and repair of the object to work, you must have a func_constructible .

The keys you will need for this entity are:

The start_built flag should be set if the object is to be 'alive' at the beginning of the map. The appropriate team should again be chosen for the team that is to own the object.

You will also need a handful of other point entities which I will now detail.

One of these will be known as the disabler, the other is the enabler (This is the one pointed to by the trigger_multiple entity) 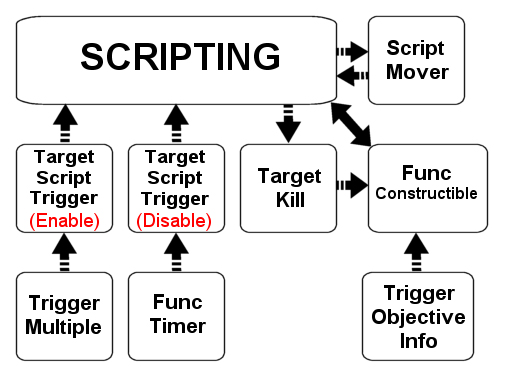 The control of the object via scripting may look complex at first, but it is in fact quite simple. The examples below are taken from the 'Fueldump' script if you wish to take a look over the whole script.

First off, you have the two script trigger routines, which tell the tank whether there is someone in the trigger or not.

Now we'll take a look at what the tank does with this information.

First off, it calls the trigger 'stuck_check' function (which will be explained later), which will set bit 3 of accum 1 if the object is stuck. If it is stuck, it aborts, as movement is not possible.

Next it aborts if we were already following a path, as you don't want the startup stuff to happen if already moving.

Next, it will abort if a script_lockout (accum 5, more information later) is in place, or if the tank has been damaged (accum 1 bit 7 ).

If it passes all of these checks, then the tank has just started moving, and so it calls all the sound startup and animation startup functions. As it has some waits to have the animation work properly, a script_lockout is put in place so that nothing can interrupt this sequence. After the startup is complete, it then calls the 'trigger move' function, to commence movement along a path.

The disabler routine below is fairly simple.

Every time this is called (once per second), accum 4 is incremented. If the value of accum 4 is below 4, then the function does nothing more. Accum 4 will be reset by the enabler function as long as the tank is not stuck, and someone is in the trigger. If the tank is stuck, or no-one is in the trigger, then the accum will be allowed to continue incrementing, up to the value of 4 and beyond. Once it reaches this stage, the rest of the function will be allowed to execute, and the stopped moving flag (accum 1 bit 8 ) will be set. This also then calls the 'trigger deathcheck' function, to be sure that something is checking whether the tank has been damaged enough to go into its broken state.

Outlined below are some more of the tank's main functions.

Above is one of the tank's 'trigger run' functions. This first sets the moving status to in (accum 1 bit 2 ), then issues the command for the turret to move (as it isn't attached using a tag in this case), and then issue its own move command. After this has completed, it sets the move status to off again, then calls the 'trigger run_continue' function.

The 'trigger run_continue' function increases the position counter for the tank, checks it hasn't been damaged, if it hasn't, then checks it hasn't stopped because no one is escorting it, and then if there are escorts, trigger the move function, to continue movement.

These functions, plus several more not outlined here, form a set of functions that check whether the tank can move or not.

The 'trigger stuck_check' function first resets accum 1 bit 3 , which it uses as an indicator to say whether or not the tank is in fact stuck. Since we are resetting it every time, we are assuming that the tank is not stuck unless we are told otherwise, which is the easiest way to handle things. Next, it calls the functions for each individual reason for being stuck, such as the bridge not being built, or it having finished its entire run across the map.

These extra functions simply check to make sure they are valid, usually by checking the position indicator, and any other data they may need to know about. If those checks don't fail, then they set accum 1 bit 3, as an indicator that the tank is in fact stuck. Now, no matter what any of the other events do (assuming they don't reset accum 1 bit 3, which they shouldn't ever do), the flag will remain set when the 'trigger stuck_check' function exits. Other functions can use this to check whether the tank is stuck by simply calling the 'trigger stuck_check' function, then checking the value of accum 1 bit 3 .

These two functions, in combination, check whether the tank should stop its movement, as either it's stuck, or no-one is escorting it.

The 'trigger stopcheck_stuck' function does the initial checks to see whether either of those conditions are met, and stores the result as accum 1 bit 6 .

The 'trigger stopcheck' function will then check that value, and act accordingly, either shutting the tank down, or aborting. As before, since the shutdown animation requires some waits, the shutdown enforces a script lockout during that period to prevent anything from interfering.

The script lockout system acts as a reference counter, that is, it keeps track of how many times it has been told to lock itself using accum 5. This allows various parts of the script to check whether it is locked, by checking that accum 5 is not 0. As this isn't just a flag, it can be used by multiple parts of the script at once, from multiple procedures, as long as they make sure to unlock the tank when they are finished. This was used for the firing sequences and some other things.

This also fires the target_kill entity, which is used to damage the func_constructible entity, making the trigger_objective_info entity become active, and so, allowing people to rebuild the constructible, which in turn, will activate the script_mover entity which will call the 'rebirth' function below.

This function simply makes the tank look repaired, setting the appropriate flags, and starts the low engine hum up again.

This is the trigger_multiple entity routine which is used to move the tank. When it spawns, it attaches its origin to a tag positioned at the turret origin on the tank. This allows the trigger to follow the tank around, without having to script its movement independently.

This is the trigger_objective_info entity routine, which is used for the repair of the tank. As with the trigger_multiple entity it attaches itself to the tank, for easy movement.

This is the func_constructible entity associated with the tank. First, it sets its construction class, which is required for the command map marker to show correctly. When the construction finishes, it activates the tank, which will call its 'rebirth' function, and fill its health up again.

When the tank reaches its final position, the 'trigger final_pos' function is called, which changes the amount of XP you get for repairing the tank.